Were we ever at peace? The irreversible entanglement of science, politics and regimes of knowledge control

On Thursday 26 January 2023, the first meeting of the "Theseus Colloquia" will be held in the Aula Magna 'Emma Strada' of the Politecnico. Theseus Colloquia are a series of seminars on the topics of technology, its preconditions and its social, economic, political and environmental impact, hosted by the Theseus research centre of the Politecnico. They are given by international experts working on issues fundamental to contemporary societies in an era of technological transformation. The first meeting of the cycle is entitled "Were we ever at peace? The irreversible entanglement of science, politics and regimes of knowledge control" and will have as guest speaker John Krige, Professor Emeritus in the School of History and Sociology at Georgia Tech in Atlanta.

The centrality of science and technology to the economic and military power of the state in a competitive world system has transformed the practice of science itself, and the role of the state in the political economy of knowledge production and circulation. The production of new knowledge flourishes when researchers and their novel ideas circulate beyond national borders, while it is in tension with the determination by the state to restrict some knowledge flows across borders in the name of national and economic security. This talk will describe the evolving policies adopted to regulate the transnational flow of sensitive, but unclassified knowledge and know-how by the US government since WWII in its competition for global influence with the Soviet Union and, more recently, with China. Attempts to reconcile ‘scientific internationalism’ with the regulation of sensitive knowledge and know-how devised during the Cold War have become increasingly brittle with China’s rise to prominence as a scientific and technological power. The scope for international scientific collaboration has contracted, and calls for decoupling the western and Chinese research systems are gaining traction along with calls to stop scientific collaboration with Russia after the invasion of Ukraine. 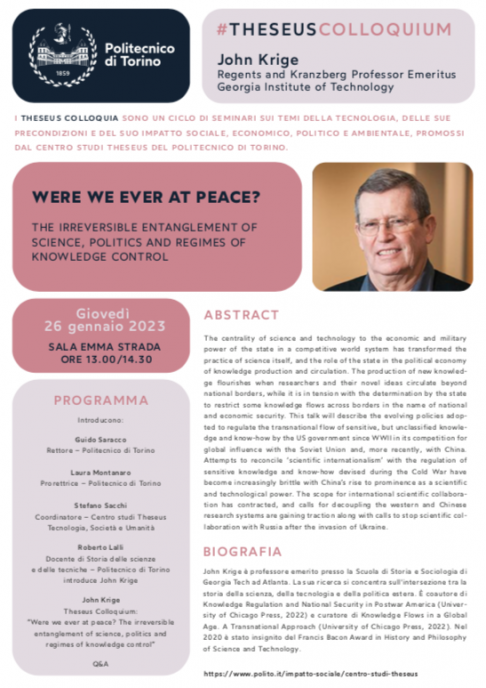