The Myth of the Bottom-up in Precarious Housing. Lessons from the largest “informal” settlement in Dhaka

“Informal” settlements are often described as a bottom-up process catering to housing precarities in global south conditions it is seen as a site of radical politics and even a manifestation of the right to the city (Purcell 2013). However, this presentation, which is based on empirical findings from a multi-year socio-spatial ethnography conducted in Karail– the largest informal settlement in Dhaka, problematizes this reductive characterisation, not to contradict such claims but to explore the complexities within. The findings from Karail allow for identifying the interconnections between different actors across different binaries that make it work and the different modes of settlement’s production itself. Both the entanglements and processualities point to the inadequacy of using the notion of the bottom-up to explain the ongoing struggles and power dynamics. Beyond power itself, the presentation recasts the settlement as a manifestation of a landscape of intersecting desires in an effort to speak of precarious housing in a new vernacular transcending the stifling dichotomy of top-down/bottom-up.

Tanzil Shafique is a Lecturer/Asst. Professor at Sheffield School of Architecture. He co-leads the MA Urban Design programme and the Southern Theorising Group (STingG). As an activist, he co-convenes the Dhaka-based Platform for Housing Justice (Najjyo Abashon Moncho), which works on diverse housing rights issues. He holds a Ph.D. from the Melbourne School of Design where he taught graduate planning and design studios. He is also a Honorary Member at the Informal Urbanism Research Hub at University of Melbourne. He co-founded and now co-directs Estudio Abierto/Open Studio, a think+do tank on architecture and urbanism. Previously he was a Research Fellow and Studio Instructor at the Fay Jones School of Architecture + Design as well as Project Designer at the Community Design Center, both at the University of Arkansas. His work has garnered numerous AIA National Award for Urban and Regional Planning, as well as his writing on design philosophy and urbanism, has been published internationally. He holds an M.Arch in Ecological Urbanism from Rensselaer Polytechnic Institute in New York. 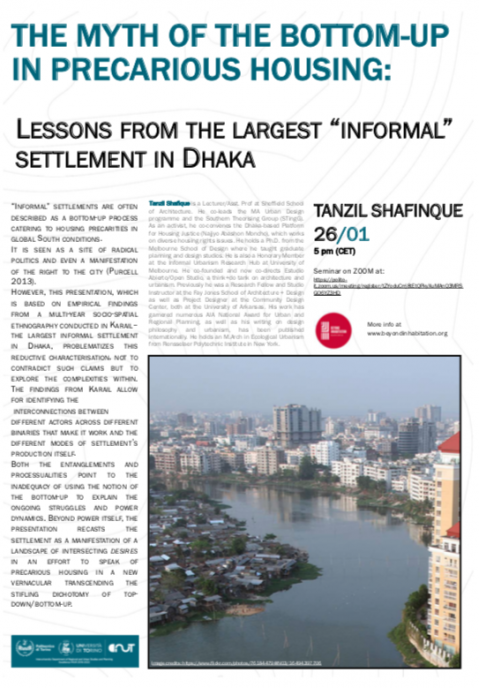